These images were inserted into the genome of Escherichia coli bacteria, and later recovered with an accuracy of 90%. This is certainly another demonstration of the fantastic ability DNA has for digital data storage.

The image of a hand and this little film taken from the famous collection of Human and Animal Locomotion by the English photographer Eadweard Muybridge were two pieces of digital information to be inserted into the DNA of live bacteria, more precisely, a population of Escherichia coli Which is found in the intestinal flora of humans and other animals). The experiment was immensely successful and was achieved with the genetic editing technique known as CRISPR, which allows you to alter and tinker with DNA.

The result of this experiment by scientists at Harvard University in the USA shows us images introduced into a bacterium that were later recovered quite accurately. But how was this possible? What is it for? These will be the two most frequently asked questions.

As? The team, led by Seth Shipman and involving experts in genetics, regenerative biology and “biologically engineered engineering,” used the CRISPR system to insert images and a short GIF (five frames, 36 × 26 pixels) of the mare Annie G. Galloping, collected from the Human and Animal Locomotion collection of the photographer Eadweard Muybridge) into a population of Escherichia coli bacteria.

Although surprising, the introduction of this information into DNA is not an unprecedented feat. Living organisms always do so naturally, when, for example, they “file” information about the viruses that invade them, allowing this “memory” to protect them in the next confrontation. But in addition to this natural process, some artificial experiments have already been made. Scientists have realized at once that DNA is an excellent medium for storing information. What is it for? In a microscopic cell, in a bacterium (in this case), it is possible to store enormous amounts of information.

Over the last few years, scientists have explored and tested the potential of this information storage medium and have even been able to, for example, introduce an entire book into the DNA of Shakespeare’s sonnets, an excerpt from the speech “I Have a Dream “By Martin Luther King, a scientific article, a silent film, photographs and even an Amazon valley. These experiments were performed in the laboratory, with pieces of DNA, in test tubes.

It has also been possible to write information in the genomes of living cells, such as when a phrase of the bible was inserted in a microbe, the lyrics of a song and the famous Einstein equation (E = mc2) in bacteria. A synthetic genome of a bacterium has been produced in the laboratory of the famous geneticist Craig Venter, in which the names of the members of the research team were inserted.

But in most of these cases, the information is inserted into the entire genome. As if we were moving an entire building into DNA. This time, the scientists inserted the image of a hand and the small film, brick by brick. They used the nucleotides, the building blocks of DNA, to produce a code that relates to the individual pixels of each image.

As for GIF, the sequences were inserted image by image (plan-to-plane) over time in living bacteria, causing them to fit into the genome in the order in which they were delivered. Once inserted into the E. coli genome, the data was then retrieved through DNA sequencing and the images reconstructed by reading the assigned code.

Seth Shipman’s team managed to reconstruct the images with an accuracy of approximately 90%. 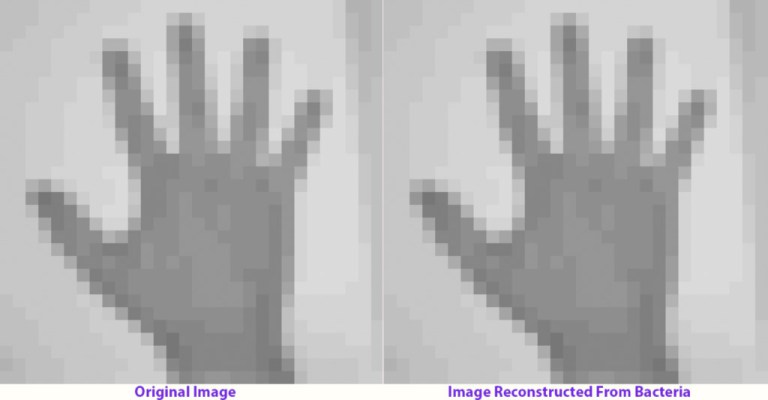 This complex technical operation relied on CRISPR, which is known as a genetic editing system that uses a tool (protein) called CAS9 to make a “cut and paste” game in genes. In this case, the CRISPR system was used with the CAS1 and CAS2 tools that are involved in the memory of the bacteria, functioning as information “filers” that store the data in the genome.